Enter your City name or Pincode

The ancient city of Jagraon is located in Ludhiana district of Punjab, India. Former name given to this town was believed to be “Jagar aon” which stands for an area which has huge flooding but in view of the fact that this overflowing has stopped since years ago. Further, the name could have been taken from a word along with the suffix “graon” which is actually improvised Sanskrit word “Grama” which stands for Village similar to the word Gaon in Hindi.


History and Religious Importance of Jagraon

Jagraon was established (with the initial name of Jagrawan which precisely means the city of Rais) by Rai Kamaluddin who was the father of Raikot’s ruler Rai Kalha III in 1680 AD. This city is famous for the Gurudwara Nanaksar Sahib and Gurudwara Mehdiana Sahib. Every year a fair known as Roshni Mela is hosted and celebrated for three days every year at Mausoleum or tomb of Hazrat Baba Mohkam Din (RA) in the third week of month February. The history accounts tell us that there were two wives of Baba Sahib, named Sarah Bibi and Mai Jeena Bibi, and in the Mausoleum, Sara Bibi is buried just adjacent to Baba Sahib while Mai Jeena Bibi which is wonderfully made is buried around one and a half mile from the Mazaar of Baba Sahib. Numerous Tourists from all around the country visit this place during the Annual Urs Mubarik or Roshni ka Mela to pay a tribute to her. 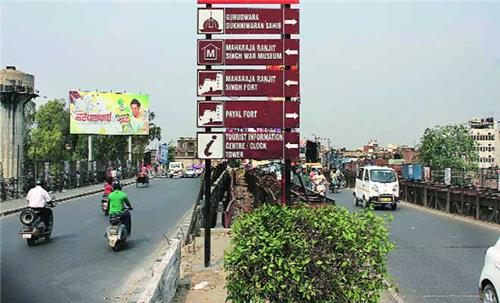 Jagraon
By 1947, there were several families of Muslims residing in this place. Adjacent to the right of the Mazaar of Baba Mohkam Din (RA), the Maqbara or tomb of Syed Hameeray Shah Sahib (RA) is situated; he was Baba Sahib’s adopted child as he had no baby from any of his two wives. Syed Hameeray Shah Sahib (RA) was his Great Khalifa and Mutabanna and Mutawalli of Baba Sahib’s all belongings and possessions. In February 1913 A.D., Baba Mohkam Din (RA) died and was begun by his Pir o Murshid Hazrat Pir Muhammad Amin Sahib Sirhindi (RA), a renowned saint and also the Wali of Naqshbandi Silsila (Order) which was founded in India by Hazrat Ahmad Sirhindi Mujaddid Alif Thani (RA). The Sajjada Nishin and Mutawalli of this Mazar Shareef was Maulvi Mazhar Hassan Wakeel (RA) advocate and during partition, in 1947 he moved to the country Pakistan.

Jain Temple is another famous structure in this town. It has been an important pilgrim temple of Jain people and thus draws lots of tourists especially people from Jain community who come for the yearly Dikha Mahotsav which is held in March’s third week. The ancient walled town having the four entrances is famous for the magnificent Mughal styled architecture. And, the bazaar situated in the town is called as Anarkali Bazaar which is named after Anarkali, the beauty of Akbar’s Palace. This much crowded city is brought to a halt by the wandering cows that can be seen roaming around the contracted paths.

The next important fact about Jagraon is that it is the birthplace and hometown of the renowned man who took part in Indian Independence movement, Late Lala Lajpat Rai. The man under whose guidance Shaheed Bhagat Singh, the great fighter in the war of Independence, was influenced. Lala Lajpat Rai’s house is converted into a public library presently. As per the Major Charles Francis Massy's 'Chiefs and Families of Note in the Punjab', the head of Jagraon were the Chandravanshi Rajputs in which the last emperor was Rai Inayat Khan, who is the curator of Guru Sahib’s Ganga Sagar during India’s partition in the year of 1947. Presently, Rai Aziz Ullah Khan who is the ex-MP (MNA) of Pakistan is Rai Inayat Khan’s grandson.

Jagraon coordinates at 30.78°N 75.48°E, and has the standard altitude of 234 m and is quite scorching in summers and chilly during winters. Founded around three centuries ago, this historic city of Punjab is situated just 37 km the Ludhiana District Headquarters, around 29 km from the town Moga , 31 km from the city Nakoda and 55 km from the town Barnala.

The town of Jagraon had a total population of 60,106 inhabitants in which 53% are males and 47% are females, according to the report by census 2001 of India. The average literacy rate is 68% here which is precisely higher than the national average literacy rate of 59.5% and there 71% literate males and 65% literate females. The percentage of children below the age of 6 years is 11% in this area. Apart from the given account of information, there is a big seasonal and nomad migrant’s population which has not been calculated yet in the town. Rural and Sub- Urban inhabitants both live in Jagraon and the town has citizens from communities like, Buddhists, Sikhs, Muslims, Hindus and Jains etc. and it is also said that previously in 1947 by India’s partition, there is a substantial Muslim population that lived here.

Jagraon is the sub division in Ludhiana district of Punjab. which actually has a total of five sub-divisions and Jagraon is one of them. Mr. SR Kaler represents Jagraon in Punjab Legislative Assembly. Jagraon is a Municipal Council with 16 wards. Nominated council of each of these ward together choose and select the President of Jagraon Council. The district administrative is looked after by the District Commissioner with Sub-Divisional Magistrate at the top of the organization on the Sub-division stage and then it turns down to Executive officer of the Municipal Council, Patwaris and Tehsildars on the revenue collecting division to Block Development Officials that represent on the village stage of the structure.

Jagraon is ranked as the third biggest grain gathering and collection market of all around Asia following Khanna and Rajpura. Other than agriculture, Jagraon is a big commerce town for rice husking having over 100 rice shelling services. The town also arranges the second biggest animal marketplace in all over Punjab; Vallah town close to Amritsar is the biggest animal market. The projected green field international airport project which was to be built at Halwara was abandoned due to the discrepancy between the Civil Aviation Ministry and the Indian Air Force.During the modern period, Jagraon has seen many commerce based entities growing up here, like the Mumbai’s commercial pharmaceutical firm Wockhardt Limited, Ludhiana’s soap firm Chhokra Soap, an edible oil factory and a firm of Adani Group next to the Jagraon’s authority. Jagraon is presently experiencing a great bang in the real estate aspect along with sonic growth in the dwelling and industrial regions and this boom is due to the reasons like, industrialization, proximity to the biggest metro of Punjab, being the centre of agricultural and animal markets, situated on the center of the state and well linked by all means of transports. This city’s businesses also consists of clay brick industrial units, interlocking tile units, agriculture equipments makers, cattle food-supply units, goal and diamonds jewelry making, supplies industries and electric tools industrial units as well.

Being a historical town of Punjab, Jagraon is frequently visited by a large number of travelers that visit this place to know more about its history and to receive the holy blessings of their respective Gods in the religious sites here. In order to provide a comfortable stay for all the tourists that visit Jagraon, the city has presently three hotels situated in the town and numerous other hotels in the nearby cities of Raikot, Ludhiana, etc. These hotels provide rooms at affordable prices and have all the necessary as well as luxurious facilities in them that vary according to the prices. Below, we have given the details of the hotels situated in Jagraon town.

The over three hundred years old town of Jagraon has beautiful markets to shop things from. Atma Ram Chowk is the well known chowk here and is given the name after the Atma Ram Halwai and Anarkali Bazaar or Kukar Market is the ancient and significant market which is the place for all type of big jewelry shops and stores that sell wedding dresses. This market is home to a large number of jewelry stores and stylish wedding stores. The some of the popular bazaar also include, Purani dana mandi, Misserpura Bazaar, Railway Road, and Tehsil Road.

Jagraon town is home to number of hospitals and clinics. It offers 108 free of charge ambulance facility. Further, there are all types of general as well as top class private doctors available there. The city is home to over 100 hospitals located all around the city that provide medical services to the nearby small cities too. Here, below we have listed some of the hospitals situated in Jagraon.


Safety and Security in Jagraon

Senior Superintendent of Police along with Deputy Superintendents of Police, Station House Officers, looks after the law and order situation of the region. The local police department of Jagraon town is given the responsibility of maintaining the order in this town. The police officials of this city provides a safe environment and are known for decreasing crime rate of Jagraon in the recent years. The present day crimes include some pitiful crimes like, small theft etc. and are handled efficiently by Jagraon Police Station. The safety of Jagraon is the primary motive of the administration and has been quite successful in providing a safe and sound atmosphere for each and every individual of the town.

Jagraon is located just 8 miles north from the geographical midpoint of Punjab and the town is surrounded on the North by the River Satluj, dividing it from its head district of Jalandhar and Moga district is on the west direction while Raikot is 13 mile on the south from the city and Ludhiana is 24 miles on the east of Jagraon. Coming to its linkage by Road and Rail transports, it is properly linked to Ludhiana, Firozpur along with the other cities of India and Jagraon is situated on the intersection of National Highway 95 with National Highway 71. The closest domestic airports are Halwara (16 km away), Sahnewal at a distance of 45 km and Adampur which is 70 km from Jagraon. Moreover, the international airports nearby to Jagraon are Guru Ram Das International Airport in Rajasansi which is 150 km from the city, Wagah Landport (on the boundaries of India and Pakistan) at a distance of 162 km and Indira Gandhi International Airport in the capital city of New Delhi is 360 km away from Jagraon.


Jagraon at a glance

Comments / Discussion Board - About Jagraon